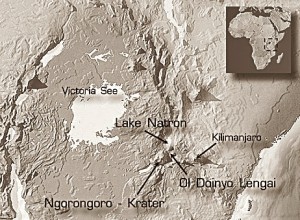 With an altitude of 2,960 meters (9,711 feet), Ol Doinyo Lengai, or “Mountain of God” in the language of the Maasai people, is an active volcano within the Arusha region of northern Tanzania, just south of Lake Natron. It is the only active volcano in this part of the East African Rift Valley. In particular, it is a holy place of pilgrimage for Tanzania’s Maasai community; barren Maasai women have been known to sacrifice a goat at the foot of the mountain in hopes that En’gai (God) will accept their gift and grant them a child. Apart from the Maasai guide himself, Maasai’s generally do not climb the mountain but allow tourists to do so.

Ol Doinyo Lengai is the only active volcano in the world to erupt natrocarbonatite lava, making it truly unique. This lava is highly fluid and contains almost no silicon. With a temperature of around 500 degrees Celsius (950 degrees Fahrenheit), it is much cooler than basaltic lavas (by some 50%). This low temperature gives Ol Doinyo Lengai’s lava a black appearance in the sunlight, rather than the red glow common to most lavas. The lava is also extremely water soluble and easily washed away by the rain. Its unusual composition results in a volcanic landscape that is different from any other in the world. The most recent explosive eruptions occurred in the period from July 2007 until August 2008, and, reportedly, in October 2010.

The climb normally starts at midnight, when the temperatures are lower. This allows you to reach the summit in time to enjoy the amazing sunrise, and to descend before the onset of the scorching heat. A good level of fitness is highly recommended. This is considered an adventurous climb, but also physically challenging, owing to the mountain’s steep slope (and the unbearable daytime heat, if you happen to get caught in it). That said, the spectacular views on the approach to the summit make it all worthwhile!

Climbing Ol Doinyo Lengai takes a minimum of three days, due to the long travelling distance from Moshi to the starting point. This trek can also be made as an addition to a longer safari, if desired.

Theme by infinity360 media
Back to Top