The famous ice-capped Mount Kilimanjaro is the highest free-standing mountain in the world, at 5,895 meters (19,341 feet), and lies just three degrees south of the Equator. It attracts more than 50,000 climbers annually, each of whom is in some way in quest of the challenge and personal satisfaction of conquering Africa’s highest peak. Words do not suffice to describe the breath taking scenery you will take in both on and surrounding this legendary volcanic mountain.

In 1889, Hans Meyer and Ludwig Purtscheller were the first Europeans to conquer Kilimanjaro’s highest point – Uhuru Peak. But climbers attempting the ascent today face a very different mountain, owing to the huge climate changes over the past several decades. Gone are the ice barriers and many of the other obstacles that these pioneers had to overcome. Moreover, modern-day climbers enjoy state-of-the-art hiking equipment and, importantly, benefit from enhanced safety thanks to established routes and strict rules and regulations enforced by the Kilimanjaro National Park rangers. 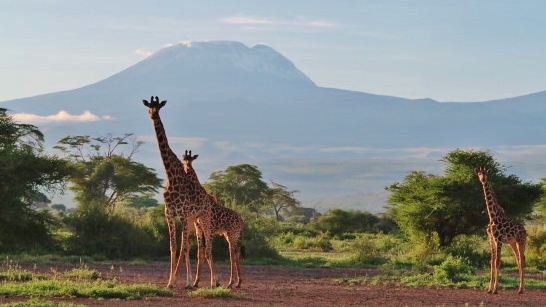 While wildlife and vegetation become increasingly scarce with the rise in altitude, a number of wild animals can be seen in the forest that covers the lower slopes of Kilimanjaro. These include the black-and-white colobus monkey, the blue monkey, the forest duiker, and other small mammals.

Kilimanjaro has several different climate zones, and vegetation and wildlife vary accordingly. The lower slopes (from 800 -1,800 meters or 2,600- 6,000 feet), though once forested, are now densely populated and the land has been cleared for the cultivation of coffee, bananas, corn, and other crops. From 1,800-2,800 meters (6,000 – 9,200 feet), the slopes are covered by rich rain forest, which is home to a large variety of flowering plants as well as animal life. Up to 96% of all the water on the mountain originates from this zone. From 2,800 – 4,000 meters (9,200 – 13,200 feet), wildlife and vegetation become increasingly sparse. This zone is characterised by heather and moorland. It is also known for two plant species in particular: groundsels and lobelias. Above 4,000 meters (13,200 feet) – known as highland desert — the air becomes very thin with little-to-no plant life. Signs of volcanic activity are everywhere. From small stones to huge boulders, volcanic rock stretches as far as the eye can see. The vegetation slowly gives way to snow and ice, before reaching the vast glaciers announcing your arrival atop the amazing Roof of Africa . This is one of the most dramatic landscapes you will ever witness.

Known as the “Coca Cola” route because of its long-time popularity, this route is the oldest and most well established. It is the only route that offer huts for accommodation (rather than having to camp in tents). Though considered to be one of the easiest routes because of its gradual slope, the trek to the summit can be quite challenging given the sharp jump in altitude. This route also tends to be the most crowded, since climbers use the same path for both the ascent and descent.

Otherwise known as the “Whiskey” route because of its reputation as being more challenging than Marangu, the Machame route is now the most popular route on the mountain. Compared with Marangu, the paths are steeper and the days are longer, but its steadier altitude increase each day results in a higher success rate for reaching the summit. The Machame route is extremely scenic, passing through magnificent rain forests as well as other of the mountain’s finest sights such as the Shira Plateau, the Lava Tower, and the Great Barranco Wall. The descent is on the south-east side of the mountain via the Mweka route.

A relatively new route, and longer than most of the others, Lemosho is gaining in popularity owing to its remoteness (resulting in much lower traffic), beautiful scenery, and high summit success rate (related to a greater number of days to acclimatize). Because this route takes more days and involves a long drive to the starting gate, the price is higher. The Lemosho route approaches the mountain from the west. After trekking through rain forests and moorlands, this route meets up with the Shira Plateau, and then with the Machame Route.

This route is very similar to the Lemosho route, also starting in the west, but with a longer 4-wheel drive track to the starting gate. Importantly, the hike begins at 3,600 meters (11,800 feet), which can be a shock to the body due to the lack of prior acclimatization. This route joins with Lemosho and then meets up with Machame. The Lemosho route is recommended over the Shira route because of Shira’s acclimatization issues, and the fact that climbers on the Shira route miss out on one of Kilimanjaro’s ecological zones — the trek through the lower rain forest.

This is the only route that begins on the north side of the mountain, along the border between Tanzania and Kenya. Though perhaps not as scenic as the other routes, it is a good option for those who are climbing during the rainy season, since the north side of Kilimanjaro receives less rain in the early stages of the climb. The Rongai route is also famous for offering a true wilderness experience, with low traffic before descending down the Marangu route. Climbers benefit from a steady increase in altitude each day, resulting in easier acclimatization and a good summit success rate. That said, the final summit climb from the north is quite steep. The price for climbing this route is slightly higher, due to the long access drive to the start gate.

This route, which approaches Kilimanjaro from the south, is the most challenging of all, being the shortest, steepest, and most direct. It is a very scenic route, with low traffic, but the success rate is also low due to the quick ascent, which can lead to poor altitude acclimatization. This route is not used often and is only recommended for experienced climbers.

Kilimanjaro is the world’s highest free-standing mountain and the highest mountain that can be climbed without technical equipment and climbing skills. Although highly achievable, it may be one of the toughest challenges you will ever face. Good African Tours firmly believes safety comes first when climbing any mountain. Your level of fitness, climbing experience, and health must be considered before deciding which route to take, and for how many days. To acclimatize more effectively, it is recommended to take more days rather than less. This will give you a greater chance of reaching the summit and more time to enjoy the nature. A good level of fitness, with regular endurance training beforehand, is also recommended. Please note that it is extremely important to be forthcoming about any medical conditions you have.

Theme by infinity360 media
Back to Top